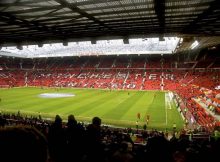 English Premier League
Manchester United are reportedly ready to lock horns with Chelsea over the signature of PSV Eindhoven’s Ibrahim Sangare this summer. The 24-year-old midfielder has established himself as a
Read More

English Premier League
Manchester United have reportedly identified PSV Eindhoven winger Steven Bergwijn as a potential signing at the end of the season, according to Sky Sports News. The 21-year-old winger
Read More